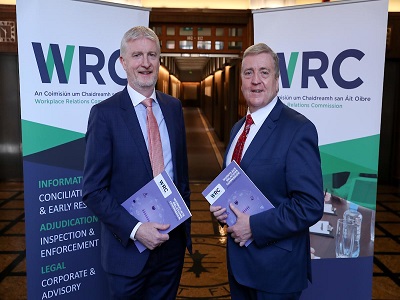 Mr. Pat Breen T.D., Minister for Trade, Employment, Business, EU Digital Single Market, and Data Protection welcomed the Annual Report by the WRC of its progress in terms of service delivery and output in 2018. “Last year was a very successful year for the WRC. In terms of the Adjudication Service the number of hearings has increased by 20% over the period while there has also been a significant increase in the overall number of face-to-face mediations conducted in the year, more than doubling on the 2017 outturn. In addition, there was a 20% increase in the inspections concluded by the WRC in 2018.”

Minister Breen also highlighted the success of the WRC in recovering over €3m in unpaid wages for employees over the year, an increase of 75% on 2017. “As the economy continues to do well, we must ensure that those in work are paid what they are due and the WRC is playing a significant role in the pursuit of this objective.”

The Minister also paid tribute to the significant contribution of the former Director General of the WRC, Ms Oonagh Buckley, to the success of the WRC to date.

Mr. Paul Duffy, chairperson of the Board of the WRC commented “Building on the WRC’s achievements, the Board submitted a strategy statement to the Minister to cover the period 2019-2022. Informed by core values of trust, independence, impartiality and innovation, the Statement set the WRC a fundamental target of establishing itself as a world leader in delivering an effective, efficient and trusted workplace relations service”.

Mr. Liam Kelly, Director General (Designate) of the WRC said, “The past year witnessed a significant increase in demand and output:

Mr. Kelly thanked the Minister, the Board, and the Department of Business, Enterprise and Innovation for their support over the period.