Speaking at the publication, Mr. Pat Breen T.D., Minister for Trade, Employment, Business, EU Digital Single Market, and Data Protection welcomed the progress made in terms of service delivery over the period. “I am very heartened to note that in terms of the Adjudication Service the number of hearings has increased by a quarter on 2016 and that, in cases where submissions are received in a timely manner and no postponements sought, then, in most instances, complainants can expect to have their case dealt with in less than 6 months. This is a tremendous achievement and represents real progress from what existed prior to the setting up of the WRC where waits of two years were not uncommon”.

Minister Breen also highlighted the fact that just under €2m in unpaid wages were recovered for employees over the year. “The economy is doing well and we are heading towards full employment and that is to be welcomed. But we must ensure that those in work are paid what they are due and the WRC has a key role in this regard”.

Wrapping up, the Minister praised the WRC for the work it has done in assisting industrial relations stability across the economy in a time of recovery. “In any time of change, whether it is positive or negative, people will always try to maximise their bargaining strength. The WRC has helped to make sure that those conversations are held amicably and without resort to action, and where it does occur, to get the parties back in the room and talking again”.

Ms. Oonagh Buckley, Director General of the WRC, thanked the Minister and the Department for the support received over the period. “The WRC has experienced tough challenges over the past couple of years as we have introduced new ways of working– both externally with our stakeholders and internally with our staff - at a time when the growth in employment has driven an increase in demand for our services. The support of the Minister and Department has been critical in the success achieved to date”.

Ms. Buckley added “late last year we commissioned an extensive survey of the users of all our services and the feedback received shows that we are very much on the right track and that satisfaction and confidence rates for our services are very high. However, they also showed areas where we need to work harder and that is our focus for this year”.

The main functions of the WRC are to:

With a wide workforce of almost 200 staff with different specialisms and with offices in Dublin, Carlow, Shannon, Cork and Sligo, and operational bases for hearing meetings in many other counties, the WRC mission is to

all of which are delivered fee free.

92% Of Adjudication Complaints Processed in less than 6 months[1]

Type of Complaint Of the specific complaints received:

Face to Face Mediations doubled on 2016

52,001 queries to Infoline dealt with 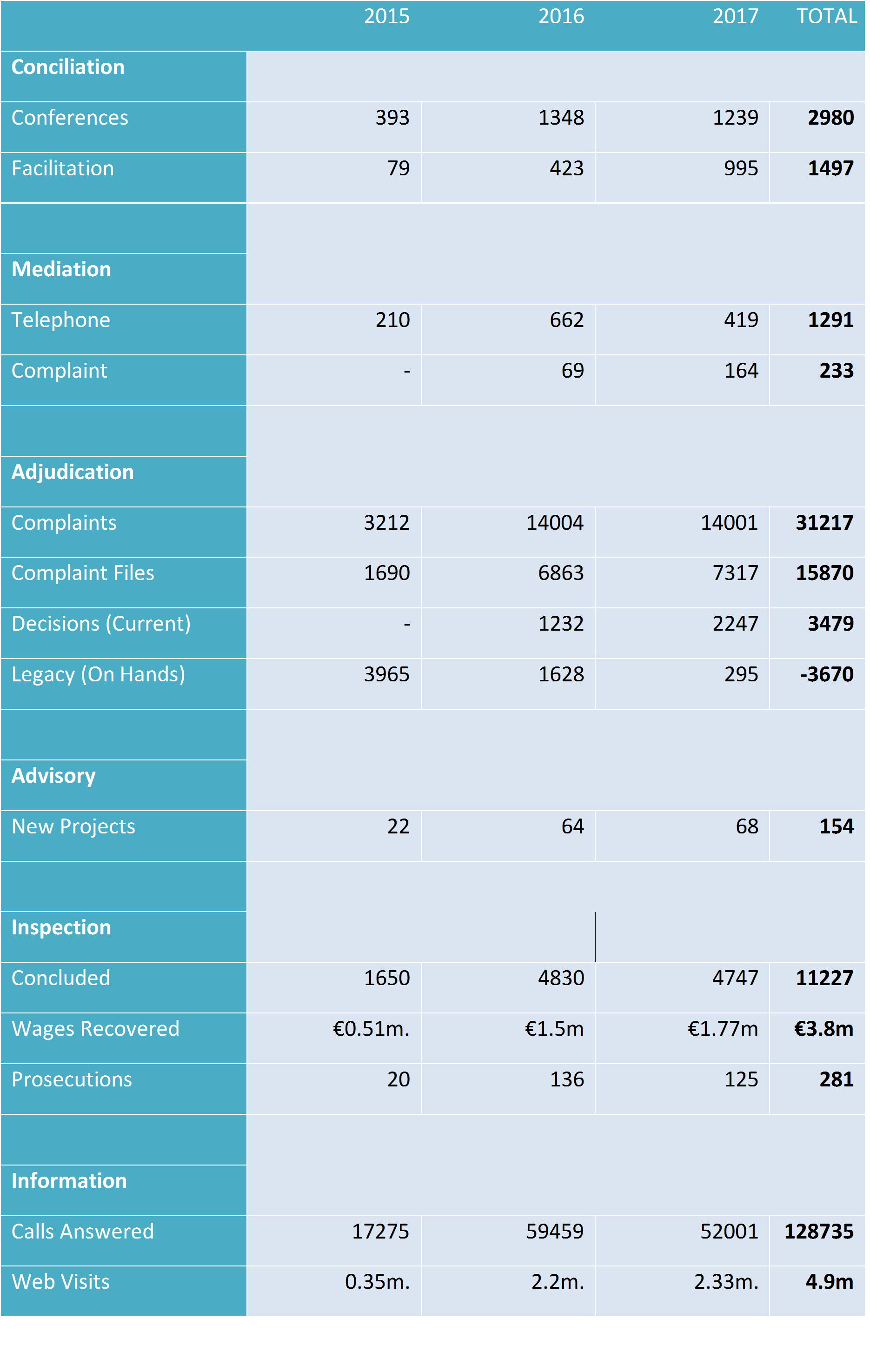