In welcoming the report, Damien English TD, Minister of State for Business, Employment and Retail said “Last year the WRC worked through the challenges that the global pandemic continued to present, and I commend everyone involved for ensuing that their services were maintained despite the difficult operational environment.

“Last year the WRC delivered a robust workplace relations service and employment rights framework for employers and workers across Ireland for the betterment of the economy.”

Minister English highlighted that the WRC recovered €964,281 in unpaid wages for workers over the year and concluded by saying, “I am confident that the WRC will continue to deliver its statutory remit while also pushing to innovate, improve, refine and reshape its services - ultimately delivering fair and compliant workplaces for all.”

Dr David Begg, Chairperson of the Board of the WRC commented “the Report indicates the successes of the year which were achieved not only in relation to the many challenges presented during the year, but which were very much in line with the Board’s broader strategic goals for the organisation”. Mr. Begg concluded by saying that “the experience of the last two years and the ability of the staff of the WRC to respond agilely had very much fed into the Board’s new Strategy Statement which was devised and submitted to the Minister in 2021.”

Mr. Liam Kelly, Director General of the WRC indicated that the trajectory of the pandemic across the year required the WRC to continuously fashion its services to changing circumstances and that he felt that the WRC had been particularly successful in this regard. “In that time” he said, “despite the challenges posed by Covid, the WRC handled a 6 per cent increase in enquiries, an 8 per cent increase in individual and collective disputes, had scheduled more adjudication hearings than prior to Covid, had inspected 4,500 workplaces and published a Code of Practice on the Right to Disconnect and a Commentary on WRC jurisprudence as well as opening a new office in Cork which is now hosting the vast majority of in-person adjudication and conciliation hearings in the region.”

In addition, Mr. Kelly noted that the WRC had successfully adapted its processes and procedures to ensure that they were fully in line with the judgment of the Supreme Court delivered in 2021 which found that the WRC was administering justice in terms of its adjudicative function. Mr. Kelly concluded by thanking the Minister, the Department and the WRC stakeholders for their support over the period.

Highlights of the 2021 Annual Report include:

In 2021, the Inspectorate of the WRC recovered just under one million Euro in unpaid wages for employees and completed 3,433 inspections over the period. In addition to carrying out its primary function in relation to employment rights, the WRC Inspectorate assisted the Health and Safety Authority in relation to monitoring the Return to Work Safely (RTWS) Protocol.

Over the course of 2021, some 12,000 individual complaints were received by the Adjudication Service and the number of hearings held increased by 75% on the previous year – almost all the hearings were held virtually.

Almost 90% of disputes dealt with at the WRC through its Conciliation Service were resolved.

The Report also states that:

A new Southern region office in Cork City opened in 2021.

A new case management system for the Conciliation Service was rolled out in 2021. 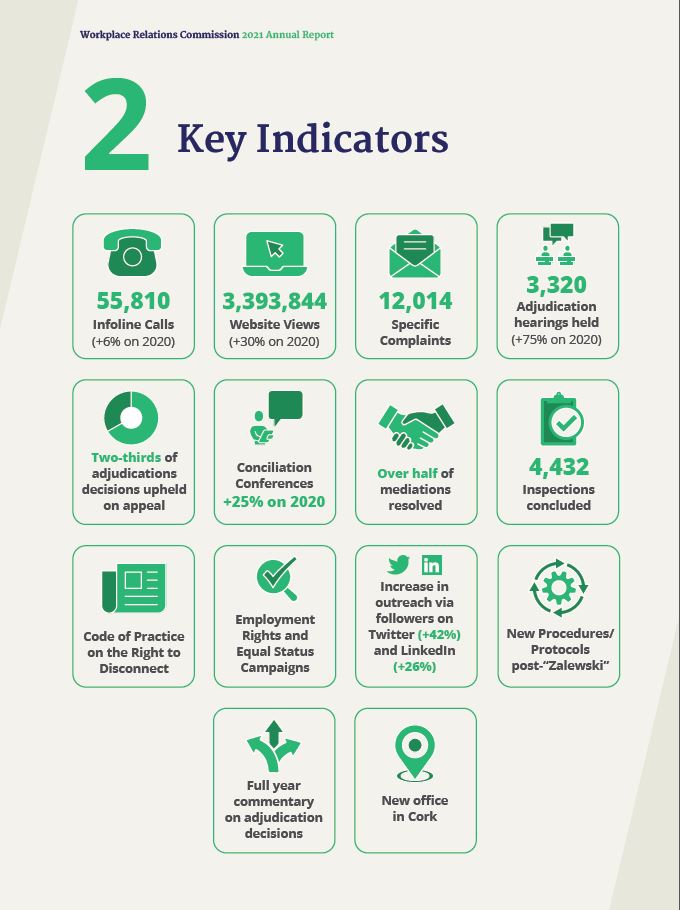 The main functions of the WRC are to:

With a workforce of just over 200 civil servants, supplemented by a further 44 external Adjudication Officers, and with offices in Dublin, Carlow, Cork, Ennis and Sligo, the WRC’s mission is to deliver a high-quality service nationally, free of charge, which is